Don't state it unless you are going to stand by it 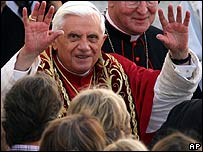 A statement from the Vatican has failed to quell criticism of Pope Benedict XVI from Muslim leaders, after a speech touching on the concept of holy war. Speaking in Germany, the Pope quoted a 14th Century Christian emperor who said the Prophet Muhammad had brought the world only "evil and inhuman" things...

Stressing that they were not his own words, he quoted Emperor Manuel II Paleologos of the Byzantine Empire, the Orthodox Christian empire which had its capital in what is now the Turkish city of Istanbul.

The emperor's words were, he said: "Show me just what Muhammad brought that was new and there you will find things only evil and inhuman, such as his command to spread by the sword the faith he preached."

Benedict said "I quote" twice to stress the words were not his and added that violence was "incompatible with the nature of God and the nature of the soul".

"The intention here is not one of retrenchment or negative criticism, but of broadening our concept of reason and its application," he added in the concluding part of his speech.

"Only thus do we become capable of that genuine dialogue of cultures and religions so urgently needed today."

In my view, if a religious teacher critiques another religious philosophy or leader, the religious teacher must make it as certain as possible that the comments are accurate. However, once the comments are made the religious teacher must not back down and apologize for them because of pressure from the group that is being criticized. If Pope Benedict XVI agreed with what Emperor Manuel II Paleologos said about Muhammed, he could have remained silent on the issue, but once he made the comments, for the sake of credibility as a Christian leader he cannot appear to back down and apologize because of pressure from people within Islam, whose founder he was criticizing. If the Pope did not agree with the comments of Paleologos, then he should have realized that in quoting the Emperor he would cause confusion in regard to his personal view. I am not by any means an apologist for the Roman Catholic Church, but if the Pope is going to criticize Islam, he must stick to what he says for the sake of integrity. If the Pope actually made an incorrect comment he should apologize, but should not apologize because of political pressure.

Pope Benedict XVI has not apologised enough for making comments offensive to Muslims, Islamic leaders in the UK say.
In a statement, the Vatican said the Pope was "very sorry" for using a quote saying the Prophet Muhammad brought the world only "evil and inhuman" things.

The apology he has made seems to amount to him giving in to political pressure, and we need Christian leadership stronger than this example.
Posted by admin