So powerful is the light of unity ...

“The purpose of the one true God, exalted be His glory, hath been to bring forth the Mystic Gems out of the mine of man—they Who are the Dawning-Places of His Cause and the Repositories of the pearls of His knowledge; for, God Himself, glorified be He, is the Unseen, the One concealed and hidden from the eyes of men. Consider what the Merciful hath revealed in the Qur’án: No vision taketh in Him, but He taketh in all vision, and He is the Subtile, the All-Informed!”

That the divers communions of the earth, and the manifold systems of religious belief, should never be allowed to foster the feelings of animosity among men, is, in this Day, of the essence of the Faith of God and His Religion.
These principles and laws, these firmly- established and mighty systems, have proceeded from one Source, and are rays of one Light. That they differ one from another is to be attributed to the varying requirements of the ages in which they were promulgated.
Gird up the loins of your endeavor, O people of Bahá, that haply the tumult of religious dissension and strife that agitateth the peoples of the earth may be stilled, that every trace of it may be completely obliterated. For the love of God, and them that serve Him, arise to aid this sublime and momentous Revelation. Religious fanaticism and hatred are a world-devouring fire, whose violence none can quench. The Hand of Divine power can, alone, deliver mankind from this desolating affliction. Consider the war that hath involved the two Nations, how both sides have renounced their possessions and their lives. How many the villages that were completely wiped out! 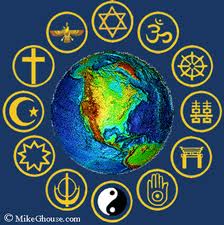 The utterance of God is a lamp, whose light is these words: Ye are the fruits of one tree, and the leaves of one branch. Deal ye one with another with the utmost love and harmony, with friendliness and fellowship. He Who is the Daystar of Truth beareth Me witness! So powerful is the light of unity that it can illuminate the whole earth.