........ assigned two stations unto each of the Luminaries arising from the Daysprings of eternal holiness. One of these stations, the station of essential unity, We have already explained. “No distinction do We make between any of them.” The other is the station of distinction, and pertaineth to the world of creation and to the limitations thereof. In this respect, each Manifestation of God hath a distinct individuality, a definitely prescribed mission, a predestined Revelation, and specially designated limitations. Each one of them is known by a different name, is characterized by a special attribute, fulfils a definite Mission, and is entrusted with a particular Revelation. Even as He saith: “Some of the Apostles We have caused to excel the others. To some God hath spoken, some He hath raised and exalted. And to Jesus, Son of Mary, We gave manifest signs, and We strengthened Him with the Holy Spirit.”
It is because of this difference in their station and mission that the words and utterances flowing from these Well-springs of divine knowledge appear to diverge and differ. 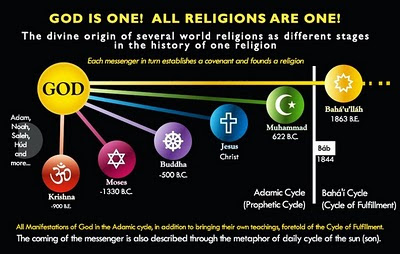 Thus, viewed from the standpoint of their oneness and sublime detachment, the attributes of Godhead, Divinity, Supreme Singleness, and Inmost Essence, have been and are applicable to those Essences of being, inasmuch as they all abide on the throne of divine Revelation, and are established upon the seat of divine Concealment. Viewed in the light of their second station—the station of distinction, differentiation, temporal limitations, characteristics and standards,—they manifest absolute servitude, utter destitution and complete self-effacement. Even as He saith: “I am the servant of God.  I am but a man like you.”

Bahá'u'lláh The Kitáb-i-Íqán
Posted by admin