http://www.bahainews.ca/en/110228-celebrationsFor Ayyám-i-Há, a neighbourhood children’s class in Calgary decided to run a drive for the food bank. The family that hosts the class invited about fifty neighbours, coworkers and friends to an open-house event on Saturday, 26 February. 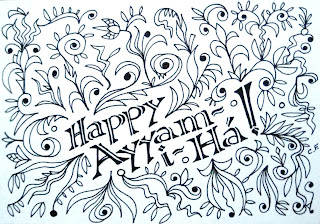 “Ayyám-i-Há” means “intercalary days”, or the days between the end and the beginning of a calendar. The Baha’i calendar begins on the Gregorian date 21 March each year and ends on 26 February. The other four days (or five, if it’s a leap year) between the end of February and 1 March are together known as Ayyám-i-Há. Bahá’u’lláh, the Founder of the Baha’i Faith, stipulated this in the Kitáb-i-Aqdas (“the Most Holy Book”). These days are celebratory and are typically focused on hospitality and generosity, and Baha’is in neighbourhoods all across the country are opening their homes for fellowship and holding celebratory events this week.
Children’s class teachers and helpers from a number of neighbourhoods in Halifax planned an Ayyám-i-Há party for the children in their classes and for the wider community. On the afternoon of Saturday, 26 February, the St. Andrew’s Community Centre bustled with crafts, games, face painting, and even a “taco assembly line”. Children’s class participants presented creative work and skits that they prepared, and there was a sing-along. Later that evening, for a slightly older crowd, a south-end home opened its doors to nearby university students and neighbours for a potluck dinner and board games. 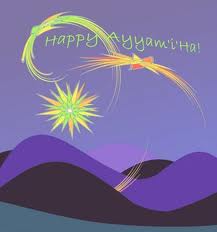 The Kamloops Baha’i community was also very busy over the weekend. Saturday was a day of collective action and community building. The second annual “Food Share” event was founded by a small team that wanted to serve their community by assisting single mothers to learn to prepare healthy meals. The event involved grocery shopping, cooking, socializing, and learning.
For dinner, the Kamloops community hosted a chili bake-off called “Chili for the Temple” in honour of the Baha’i House of Worship that is under construction in Chile, and the evening was spent learning about Baha’i Houses of Worship as well as the institutions for social good (hospitals, research facilities, care homes, etc.) that will eventually be established in its vicinities.
These communities and others have indeed been inspired by the following words of Bahá’u’lláh’s about Ayyám-i-Há:
“We have ordained that these, amid all nights and days, shall be the manifestations of the letter Ha [def. a symbol of the essence of God]… It behoveth the people of Bahá, throughout these days, to provide good cheer for themselves, their kindred and, beyond them, the poor and needy, and with joy and exultation to hail and glorify their Lord, to sing His praise and magnify His Name.” (Kitáb-i-Aqdas, ¶16)
As Ayyám-i-Há wraps up, Baha’is prepare for the month of fasting, which is followed by the celebration of the New Year (Naw-Rúz) on 21 March. February and March are joyful and spiritually rejuvenating months for the Baha’i community and their fellows, in Canada and around the world.
Posted by admin