The Onslaught of All Peoples and Kindreds

We have only to refer to the warnings uttered by ‘Abdu’l-Bahá in order to realize the extent and character of the forces that are destined to contest with God’s holy Faith. In the darkest moments of His life, under ‘Abdu’l-Ḥamíd’s régime, when He stood ready to be deported to the most inhospitable regions of Northern Africa, and at a time when the auspicious light of the Bahá’í Revelation had only begun to break upon the West, He, in His parting message to the cousin of the Báb, uttered these prophetic and ominous words: “How great, how very great is the Cause! How very fierce the onslaught of all the peoples and kindreds of the earth. Ere long shall the clamor of the multitude throughout Africa, throughout America, the cry of the European and of the Turk, the groaning of India and China, be heard from far and near. One and all, they shall arise with all their power to resist His Cause. Then shall the knights of the Lord, assisted by His grace from on high, strengthened by faith, aided by the power of understanding, and reinforced by the legions of the Covenant, arise and make manifest the truth of the verse: ‘Behold the confusion that hath befallen the tribes of the defeated!’” 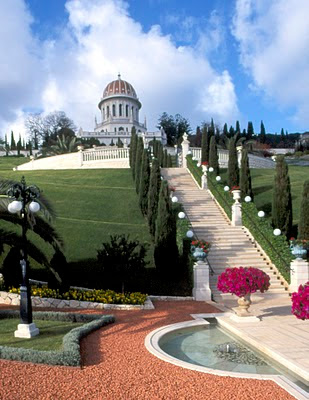 Stupendous as is the struggle which His words foreshadow, they also testify to the complete victory which the upholders of the Greatest Name are destined eventually to achieve. Peoples, nations, adherents of divers faiths, will jointly and successively arise to shatter its unity, to sap its force, and to degrade its holy name. They will assail not only the spirit which it inculcates, but the administration which is the channel, the instrument, the embodiment of that spirit. For as the authority with which Bahá’u’lláh has invested the future Bahá’í Commonwealth becomes more and more apparent, the fiercer shall be the challenge which from every quarter will be thrown at the verities it enshrines.

The World Order of Bahá’u’lláh
Posted by admin