Evangelize while in a fight for your life 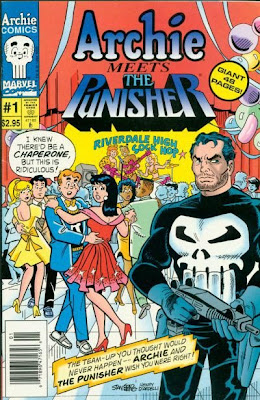 The Archie Comics version, courtesy of Jeff Jenkins: Thoughts and Theology in my links. 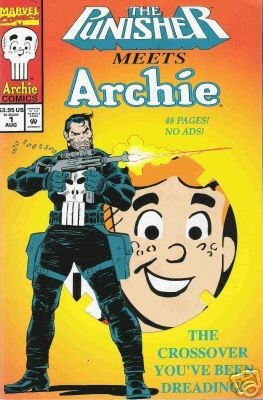 From 1991 to 1995 I attended a Mennonite Bible school. Much of the teaching was very good and I am appreciative of earning that first degree and interacting with professors that were fine human beings, by God’s grace.

A doctrine of non-resistance was taught at the school. I reasoned, and still reason that Romans 13 allows that state to use force against lawbreakers in order to maintain law and order. Mounce (1995: 243-244). God has divinely appointed the governing authorities. Cranfield (1992: 322). Governments do sometimes overstep God’s given boundaries, and in these cases Christians cannot obey the state. Mounce (1995: 243). Christians are not to take vengeance into their own hands. Mounce (1995: 241). Vengeance against evil actions will be up to God to administer, if he so wishes, and the state can be used in the process concerning legal matters. I reason that Christians can participate in the legitimate use of force to maintain law and order within both police and military forces.

A Mennonite Greek professor taught that Christians should never resist physical evil in the sense of hurting or killing an attacker since the attacker was likely unsaved. The Christian could however, stand in the way of an attacker for the sake of another. Since the Christian was saved and would be part of the culminated Kingdom of God, if killed, he/she should sacrifice himself/herself as a witness in hopes the attacker would turn to Christ. Although Biblically there is a place for martyrdom, there is also no solid Biblical reason to simply give up a life to the assailant for the sake of the attacker. I could counter that by allowing an attacker to commit violence against self and others that the violence will increase as future victims will be impacted. A greater problem of evil will likely occur. I think self-defence within the law is a reasonable Christian action and not the same as vengeance. Self-defence is attempting to prevent law and order from being disrupted when an official of the state is not present to do the job, while vengeance would be seeking ultimate justice for one self or others after the crime as been committed. Legal vengeance and justice should be issued by the state, and ultimate vengeance is in the hands of God. The Christian should not seek personal vengeance.

Another Mennonite professor and personal friend told me after two guys tried to intimidate me outside of a mall in 1994, that I should have attempted to witness to them rather than fight them in self-defence if needed. I had managed to walk away from the incident and the one punk tracked me down and spit on my car as I drove away. He did not have the guts earlier to throw a punch at me even with his friend by his side. He had threatened to shoot me…what a man.

Let us take the philosophy of my professor to the satire zone:

Perhaps an interview could be done with a thug or thugs in the process of trying to hurt and possibly kill me. This could be very helpful for an original post and I could try to get up to number 1 on Traffic Jam in the Religion and Spirituality category, if I lived.
My blog headline could read:

1. I witnessed to a guy while he stabbed me!

2. I witnessed to this thug before I beat him with my Bible

3. Repent and follow Christ or I will choke you out...Rick B's fav

Rick B can be found at:

4. Evangelize while fighting, details inside

5. A mugger stole my wallet and went to Hawaii on my Visa, and all I got was this lousy blog article

6. The blood of Christ meets the blood of the thug I just beat with the club I conceal under my jacket when I go for walks

Ernest Angley method: Use an open hand technique to the forehead of your attacker and yell…

7. Demon (Daemen) of mugging come out!

8. A thug shot me in the heart, while Jesus touched his heart

9. I attempted to perform an exorcism on my attacker and the last rites on myself at the same time!

10. Christians: Buy hardcover rather than soft-cover Bibles; they are more useful in street fights