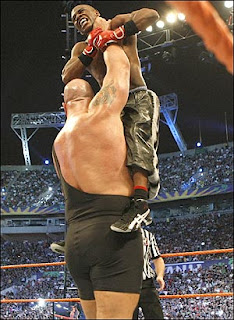 My writing is presented in regular font, and the text in italics is from the linked article below.

ORLANDO -- Even in the world of professional wrestling, Floyd Mayweather Jr. is still undefeated.

Mayweather Jr., the undefeated WBC welterweight champion, made his professional wrestling debut at WrestleMania XXIV in front of 74,635 fans at the Citrus Bowl and defeated the Paul "Big Show" Wight, with a brass-knuckled right hook to Wight's jaw.

I could win many fights with the use of brass-knuckles, in fact, even my good friend Saint Chucklins could win a lot of fights using brass-knuckles. Better yet, I could carry in a high-powered rifle to a match and pretty much be guaranteed a win.

The 7-foot, 440-pound Wight was knocked down to his knees by three Mayweather steel chair shots (and really, what would a pro wrestling match be without a few chair shots, right?) before the boxer took off his gloves in favor of brass knuckles in the "no-holds-barred match."

Perhaps the fight would have ended earlier, if Mayweather would have used a two-by-four, or a baseball bat.

So, I guess we had a phony street fight presented.

While Mayweather, who wore oversized black and white fur shorts, won his much-publicized WWE match, he took more abuse than most expected as Wight slapped Mayweather loudly across the chest, slammed him down to the mat and stepped on his body a couple of times, at one point walking over him in the middle of the ring.

Perhaps, Big Show should have sat on Mayweather and had Pizza delivered, and he probably would have won the fight.

The absurdity of the match, however, was probably best captured early on when Mayweather dangled on Wight's back and brought him down with a chokehold before Wight recovered and took out most of Mayweather's entourage.

There was more chance of Big Show choking on a peanut, while eating peanuts, sitting on Mayweather, than being choked out by Mayweather.

Five hours prior to the fight, Mayweather walked down the neon-lit 175 -foot entranceway to the ring alongside WWE Executive Vice President Shane McMahon and his business manager Leonard Ellerbe, going over everything from his entrance to the ebb-and-flow of the match.

I suppose so, for a twenty million dollar pay day for Mayweather. I think in a real fight, Mayweather would have been in trouble.

"My ultimate goal is to entertain the fans and entertain the people," said Mayweather. "A lot of people on the outside say that wrestling is not this and its not that, but believe me, wrestling is real. They're not just entertainers, they're athletes. There are hard slaps and hard punches."

The fight was fixed, but many of the larger wrestlers have so much mass and strength, they would provide a medium-sized fighter like Mayweather a substantial challenge.

Thanks to Mom for emailing these pictures to me. 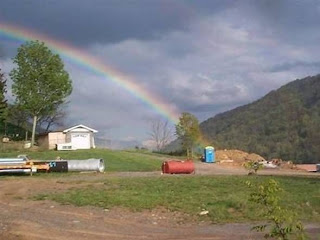 The pot at the end of the rainbow. 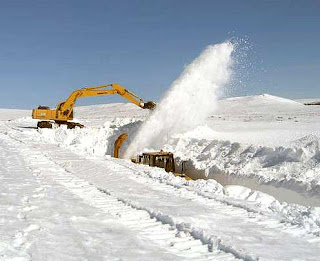 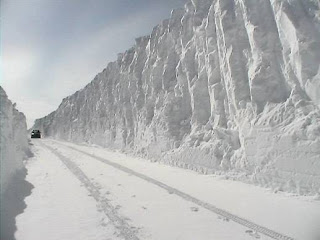 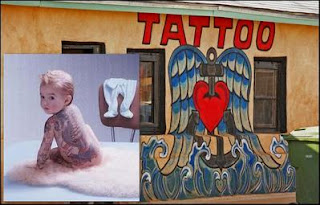 Jay Leno made me laugh last night when he stated that women with a tattoo on the back above the bum, have a tramp stamp. Classic.