Please see my comments after the BBC article. 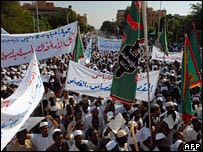 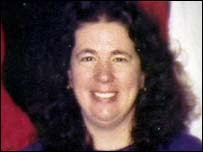 Thousands of people have marched in the Sudanese capital Khartoum to call for UK teacher Gillian Gibbons to be shot.
Mrs Gibbons, 54, from Liverpool, was jailed by a court on Thursday after allowing children in her class to name a teddy bear Muhammad.

She was sentenced to 15 days for insulting religion, and she will then be deported.

The Foreign Office was in contact with Sudan's government overnight and is due to repeat demands for her release.

The marchers took to the streets after Friday prayers to denounce the sentence as too lenient.

The protesters gathered in Martyrs Square, outside the presidential palace in the capital, many of them carrying knives and sticks.

Marchers chanted "Shame, shame on the UK", "No tolerance - execution" and "Kill her, kill her by firing squad".

Hundreds of riot police were deployed but they did not break up the demonstration.

The Foreign Office said it was seeking more details about the protest.

Prime Minister Gordon Brown has been in touch with Mrs Gibbons' family for a second time, speaking to a close relative of the teacher.

Foreign Secretary David Miliband has expressed "in the strongest terms" the UK's concern at her detention.

The Sudanese ambassador, Omer Siddig, was called back to the Foreign Office to explain the decision.

The Archbishop of Canterbury Rowan Williams said he could not "see any justification" for the sentence, calling it an "absurdly disproportionate response" to a "minor cultural faux pas".

The Federation of Student Islamic Societies (Fosis), which represents more than 90,000 Muslim students in the UK and Ireland, said it was "deeply concerned" at what was a "gravely disproportionate" verdict.

The federation's president, Ali Alhadithi, said: "What we have here is a case of cultural misunderstandings, and the delicacies of the matter demonstrate that it was not the intention of Gillian Gibbons to imply any offence against Islam or Muslims.

"We hope that the Sudanese authorities will take immediate action to secure a safe release for Gillian Gibbons."

In September, Mrs Gibbons allowed her class of primary school pupils to name the teddy bear Muhammad as part of a study of animals and their habitats.

The court heard that she was arrested on Sunday after another member of staff at Unity High School complained to the Ministry of Education.

-There have been many good serious articles written on this story, including one from Zaftig in my links. I thought I would approach this from a satirical perspective.

-A guest satirical writer on BBC 5 Live mentioned today that this incident was 'great public relations' for Islam. Now, it was pointed out on the same radio station earlier that most British Muslims disagreed with the school teacher's sentence. Personally, when I lived in England (99-01) I had positive interaction with Muslims, and would occasionally visit a Muslim acquaintance that owned a burger and chips shop for a meal and talk, which included polite religious dialogue on the differences in religious philosophy between Christianity and Islam. In fact, he gave my friend and I free dinner one night, as we showed him respect unlike many in the community. The interaction with this man was a good learning experience. However, with this type of action by the officials in Sudan it comes across as trying to make an example of an English woman that made a social mistake in ignorance. I do not pretend to know the motives of the authorities, but the episode strikes me as being childish and bitter. Rather than doing the common sense thing and let the teacher away with a warning, the authorities make a big deal about it, and are setting themselves up for public ridicule in the Western world.

-A BBC 5 Live reporter suggested today that the protesting crowd may have been somewhat staged. So, the crowd calling for the teacher's execution may have been influenced by the government to protest in public. One wonders why the economy of countries like the Sudan are not world class! Good idea, let's have adult men take part of the day off work to protest a 54 year old British school teacher and a teddy bear. Perhaps a compromise can be made and the teddy bear can be executed. If the teddy bear is publicly burned at the stake, or beheaded some of the officials and protesters will feel better, and can put in a full days work on Monday. It is good see that the authorities have a fantastic grasp on what is important in reality.