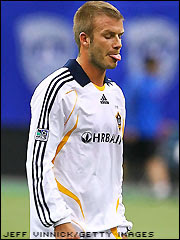 The Vancouver Whitecaps General Manager stated in a short speech to the crowd that the Whitecaps used to have the city in 'the palm of their hand' in the 1970s and early 1980s.

Thanks to my generous friend Zombie, we went to the soccer friendly Wednesday night. Our mutual friend and blog commenter, Chucky came along as well. The game between the Vancouver Whitecaps (United Soccer Leagues) and Los Angeles Galaxy (Major League Soccer) finished in a 0-0 draw. Unfortunately, the game did not feature many offensive opportunities and the Whitecaps missed a penalty kick. My reasoning is that with the new outdoor stadium the Whitecaps are planning to build, they wish to upgrade leagues and join the MLS. With a crowd of 48,000 Wednesday night, the Whitecaps did very well.

Zombie and I left Maple Ridge at 5:30 pm and it took us 1 hour 45 minutes to arrive at BC Place Stadium. The rush hour commute to Vancouver is getting worse. My previous rush hour commute to Vancouver two weeks ago also took 1 hour 45 minutes. Back in the 1990s when I worked in Vancouver in the summer, the Rush hour commute was about 1 hour 15 minutes. I reason that more freeway needs to be built, as one does not come out to Maple Ridge. I think that a freeway could be build without doing major environmental or ecological damage, but I do not claim to have read a study. An alternative is to have full-time rapid transit come out to Maple Ridge. I have heard nothing about a freeway or full-time rapid transit coming out to Maple Ridge. As a Christian, I absolutely do not want to see the development of all underdeveloped land, but on the other hand, this area needs to seriously deal with its traffic problems.

Zombie, Chucky and I had some good laughs at the game and there was a couple of people busted. First, there was a 'streaker' on the field during the match. This is unfortunately common in soccer, and I think I have seen it a couple of times in England as well, and once at a NHL game here. No one wanted to tackle this nude guy, and I cannot blame them. Eventually a woman security guard knocked him over and others jumped him. Second, after the game, a guy tried to get on the field and was hit a few times in the back of the head by a police officer (it looked like) as the law breaker was on the ground face down.

The Whitecaps did a very good job with the artificial turf and set up, but the game was way over-hyped in the media. The match was sold as world-class soccer and neither the MLS or USL is world-class or tier one. Tier one soccer/football is the premier national teams in the FIFA World Cup, the UEFA European Championship, and the South American Championship. With club teams, tier one is the premier clubs in the UEFA Champions League, England, Italy, Spain, Germany, Portugal, France, Netherlands and a few other clubs from European and South American countries. It is unlikely due to the popularity of other sports in North America, and the use of many of the best athletes, that soccer will ever be a tier one sport in North America. At best, there may be a team or two that is eventually tier one through the use of purchasing the contracts of elite players, primarily from Europe and South America.

As for Beckham, I really respected his work ethic when I saw him play several times in Manchester, for Manchester United (2000-2001).

VANCOUVER - He didn't weave any of his magic on the pitch, but David Beckham still cast a spell over a huge crowd Wednesday night.

Beckham didn't score. He didn't feather any pretty passes or launch one of his trademark bending kicks, but he still held the attention of 48,172 fans who watched his L.A. Galaxy play to a 0-0 draw with the Vancouver Whitecaps in a friendly at B.C. Place Stadium.

''It's a shame there wasn't any goals but we enjoyed the game,'' the former England captain said after the match. ''We came at each other but couldn't break each other. It was a great crowd out there and I hope they enjoyed it.''

Limited to just five Major League Soccer games this season due to injuries, Beckham surprised himself by playing over 72 minutes against the Whitecaps.

''I was meant to play only half the game but I felt stronger and stronger as the first half went on and wanted to play a little longer,'' he said. ''Then it was time for me to come off and give other players a chance to have a run around.''

When he left the game, the former Manchester United and Real Madrid midfielder waved and applauded the crowd as he walked off the pitch. The minute he was gone, many people began streaming to the exits.

The game itself may have been bland but the night supplied other forms of excitement.

The match was delayed briefly in the second half when a man leaped on the pitch, stripped off his clothes, and ran naked around the field.

The antics brought a roar from the crowd. Beckham was shown on television laughing with one of his teammates.

''I've seen it before,'' Beckham chuckled afterwards. ''We've had it a few times in Europe. You try and run the other way.''

There also was a cheer when a man proposed to his girlfriend on the big TV screen.

Despite the distractions there was no doubt everyone came to see Beckham.

The crowd cheered each time he touched the ball. Cameras flashed in the stands every time he took a corner kick.

There was a buzz of excitement near the end of the first half when Beckham lined up for one of his patented free kicks. He sent a long ball into the box that was harmlessly knocked away.

Whitecap midfielder Martin Nash said sometimes he had to remind himself not to be a spectator.
''He's got an amazing touch and great feel for the ball and great vision,'' said Nash, the younger brother of Phoenix Suns point guard Steve Nash. ''It's nice to see it in action.

''He has small movements to make himself available and get space. He wasn't on fire with his passing today, he's still coming back off injury, but he did some great things.''

Beckham, one of the most recognizable sports stars on the planet, signed a five-year, US$32-million contract with the Galaxy and was introduced by the team in July. By signing the former England captain, the MLS hoped to raised soccer's profile in North America.

The 32-year-old scored one goal before being sidelined with a knee injury for seven weeks. Beckham had the crowd cheering midway through the opening half when he dribbled the ball down the middle of the field. The sprint ended with him being sent head-over-heels by a sliding tackle from Vancouver's Lyle Martin.

Beckham was seen reaching back for his hamstring for several minutes after the hard landing. He also bent over to stretch his legs, but continued to play.

Beckham was impressed by the Whitecaps determination.

''We knew they were going to come at us,'' he said. ''We knew they had a few players that were pretty dangerous and they passes the ball around well. They played well tonight.''

After the game Beckham hobbled off the pitch. He said his ankle was stiff but other than that he felt fine.

''I'm still trying to get my fitness back,'' said Beckham, who wore a blue suit with a poppy in the lapel when he spoke to reporters. ''It's my second game in four days. My fitness will pick up in the next few games as well.''

Bob Lenarduzzi, the Whitecaps president, was a cross between relieved and thrilled after the game.

''It went almost as well as can be expected,'' he said. ''It would have been nice to get a goal (but) I was pleased we came out and tired to take the game to them.''

Lenarduzzi won't say how much it cost to bring Beckham and the Galaxy to Vancouver.

B.C. Place, usually the home for B.C. Lions CFL games, had a festive atmosphere. A huge Canadian flag hung over the boards at one end. One person waved an English flag. Fans came decked out in jerseys of their favourite soccer teams.

At half time Steve Nash, the two-time NBA MVP who grew up in Victoria, gave a taped announcement on the big TV screening wishing the Whitecaps good luck.

''It was a great atmosphere and it was great so many people came out and watched the game,'' said Beckham. ''There was a streaker and other things.''