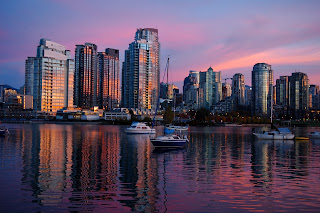 Vancouver, BC (photo from trekearth.com)

Thanks to everyone that has assisted me with my problem of evil questionnaire as I have 90 surveys in presently. However, I probably need twice that many in eventually, and so for those of you interested that attend Christian churches (my sample group) please contact me via a comment or email and I shall email or mail out a questionnaire to you.

In March of 2006 I had my uvula and tonsils removed which is known as Uvulopalatopharyngoplasty, and in July I had nasal reconstruction called Septal and tip reconstruction, right turbinate debridement. According to my surgeon I am now 70% cured, and have one stage sleep apnea instead of three stage sleep apnea which I had previously. My throat which apparently had been swollen often since I was a toddler, according to Mommy, is much better. As far as I realize I have only awoke once in the night since the surgery with a slight loss of breath and it was minor compared to what I would have experienced previously. I used to go up to 45 seconds without breathing, 20-30 times in 1.5 hours. The nose had been broken in the United Kingdom and according to my surgeon the British GP who had tried fixing the nose by hand and without anesthetic and made the nose considerably worse. His two attempts at straightening my nose were the most physically painful moments of my life. After the first attempt blood went all over my shirt and lap as I sat in his examination chair with my hands grasping the arm rests. The GP stated "sorry". My surgeon stated something along the lines that prior to the nasal reconstruction surgery some of my nasal tissue inside was located near my ears thanks to the GP! The nose is much better now and does not get plugged up, but it is still soft compared to what it was before the surgery and still makes some noises when I move it slightly by hand.

To fix the third stage of my sleep apnea my surgeon had stated previously that there was jaw surgery available for a few thousand dollars which included the need for dental work, but later he informed me that if I really wanted my sleep apnea potentially cured, I would have to go to Stanford University and pay $100,000 for perhaps two jaw surgeries which move the jaw forward. I have heard from an American surgeon in another field that with medical insurance that figure could be drastically reduced. Prior to the two surgeries from about 2002-2006 I used to sleep approximately 10-12 hours a day and often woke up nearly exhausted. Now, I sleep 8-10 hours a day and have more energy although I often have trouble sleeping several hours straight. If for example I go to bed at midnight, I may sleep until 3 am and then not get back to sleep until 6 am. This means that I nap and sleep at strange times. Needless to say I would like to have the jaw surgery done eventually.

I do not want to use the CPAP machine because knowing me I would find it very difficult to sleep hooked up with anything. The two times I was hooked up to a machine for testing I barely slept. While being tested the technician told me that many of the other people being tested for sleep apnea were using CPAP and were trying to get the surgeries done! CPAP is probably very difficult to sleep with and not sexy at all! If I was to stupidly buy the CPAP machine I am sure I would quickly desire a divorce!

I realize that as a Christian I cannot save this physical body and God uses medical doctors to maintain it, but ultimately I need God to drastically change my circumstance. 1 Corinthians 15:42 mentions that the resurrection body is sown perishable but raised imperishable and this is my hope as God's grace provides me with spiritual redemption even though I am a sinner as described in Romans 3:23. The wages of sin are death, but everlasting life is provided freely for those in Christ as in Romans 6:23.