Recent comments on other blogs (because that is how I roll) 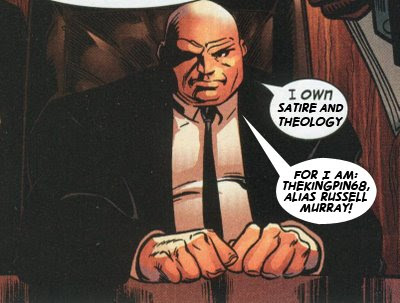 Graphic artist Jeff Jenkins at Thoughts and Theology in my links, fuels the battle between this blog and thekingpin68.

These are what I view as some of my better comments on other blogs, and so if your blog is not present it is because I did not write memorable comments in my opinion. It is not a reflection on you. I am not ‘dissing’ your blog by its absence!;)

So please, if you are upset, take some Pepto-dismal or something and take it easy, I still like you.;)

I am being somewhat satirical of course!;)

Concerning my views on music:

I personally prefer, within my tastes obviously, quite creative music, often on the technical side.

Lyrics are a secondary issue to me, and I think it is debatable on how much influence good or bad lyrics have on persons with a set worldview. I do not doubt that lyrics can at times influence some persons that are less philosophically astute and more easily conditioned, and this would include some young people.

My problem, as far a taste, with much of Christian music, not all, is that it is more worship than performance orientated, and so it does not personally impact me often, even if I am in theological agreement with the lyrics.

I like the odd Christian song musically, but besides Rush (mainly 74-82), I like Mahavishnu Orchestra, Allan Holdsworth, later Beatles, and some classical. Basically I like progressive rock, jazz fusion, art rock and classical.

Is gay the new black?:

Blacks are not condemned for being such, but homosexual acts are condemned.

A scholar's bias can seriously undermine Biblical interpretation, especially when the scholar disbelieves in the supernatural and has a very liberal approach, and as well if a scholar is attempting (perhaps unknowingly) to read a theology, of any type, into the text there is going to be a bias fueled interpretation.

Basically scholars are in trouble when they greatly lack objectivity.

A discussion of sin:

A limited definition from me:

Sin is a creation's thoughts/acts of disobedience against God. Sinful thoughts and acts are a sign of a sinful nature.

I personally doubt that animals have immaterial spirit's that go to Paradise/Abraham's bosom or Hades as do human beings (Luke 16), but I certainly think it possible that in a new heaven/new earth scenario (Revelation 21) animals could be present and precious pets resurrected.

Would these animals be immortal or need to be energized for life now and then? I do not pretend to know. If there is plant life there is likely some cycle of death present in the new order, but I reason we could keep pets forever.

Osterhaven explains that Biblically animals are considered to have a soul. Osterhaven. (1996: 1036). The most commonly used Greek word for soul ‘psuche’ psoo-khay according to Strong's Concordance. Strong (1986: 106). Osterhaven also notes that beasts as a principle of life are stated to have a spirit as well in Genesis 6:17 and 7:15. Osterhaven (1996: 1041). Strong is in agreement on the verses and the most common Old Testament word for breath or spirit ‘ruwach’ roo’-akh is used. Strong (1986: 142).

Theologically in Scripture animals are not described as communicating with God in a spiritual way, and therefore theologically the soul/spirit nature of animals is considered unable to spiritually communicate with God. The theological assumption can be made that the animal soul/spirit is limited to the temporal earthly realm and when an animal body dies, so does the soul. I lean toward this understanding.

Good points. Various church denominations stay divided at times over often legitimate doctrinal differences, but to judge others incorrectly who believe and trust in the Biblical Christ is dangerous.

A failure to recognize the spiritual and theological value of those with various views within the body of Christ, even if for the sake of argument some are incorrect on points, is one of the reasons it is difficult to build up blog links as a Christian blogger, in my opinion.

Shalom is the word

A good point, and a reason I would not participate in a multi-faith service.

One problem with a multi-faith service for me, there are many, would simply be that besides the fact we would not all be worshipping the same true God, if I was to lead prayer I would insist in praying in Jesus name.

Some would not mind, but perhaps some would, but that is how I roll.;)

Life on the blade

Romans 13 allows the state to maintain law and order, and so I reason this includes the potential use of military force. But in a fallen world, as we have it, even a just war would be a lesser of evils.
And…

Yes, my research at a Mennonite Bible school and later, taught me that turning the other cheek meant that one was not to seek personal vengeance as issuing justice would belong to the state.

The issue of self-defence becomes more complex when a police officer or soldier is not there to protect one in the time of need. But, the law is still to be obeyed if at all reasonably possible I would reason, even in self-defence.
Posted by admin