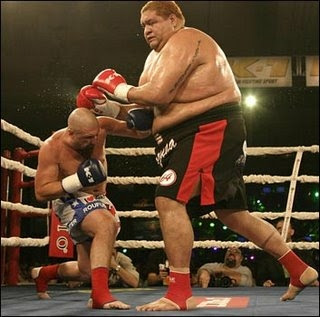 1. Below is an interesting...sort of fight.

The undefeated WBC welterweight champion will take on Paul "Big Show" Wight as part of WWE's "WrestleMania XXIV" at Citrus Bowl in Orlando, Fla., on March 30.

The one-fight deal, which is believed to be the largest single purse for a pro wrestling match, was finalized in January by Mayweather's advisor, Leonard Ellerbee.

"I had approached the (WWE) about a year ago but it didn't fit into our schedule," said Ellerbee after a news conference at Staples Center. "We sat down with them again about a month ago and they made an incredible offer and me and my business partner Al Heyman sat down with them and we cut the deal. It's an eight-figure deal worth $20 million just for this one fight."

Mayweather is 39-0 in the ring, but the wrestling match will have a slightly more skewed tale of the tape than the 5-foot-8, 150-pound boxer is used to. Wight comes into match standing 7 feet tall and weighing 430 pounds.

"I weigh three times as much as he does. It's not fair, but I'm a businessman and I see an opportunity for business," said Wight, punctuating his statement by flinging the wooden podium to the floor.

Mayweather hopped onto a chair and exchanged glares with Wight while WWE regulars Randy Orton, John Cena, Triple H and Edge looked on

"We've wanted to do something with Mayweather for quite sometime," said WWE Executive Vice President Shane McMahon. "I brought my dad [Vince McMahon] into it because he grew up and did a lot of promotions with [Muhammad] Ali and I told him this guy is Ali-plus. He's tailor-made for our business."

Mayweather plans to train with WWE Latino star Ray Mysterio, who wears a mask on his face. "WWE is the biggest it gets," Mayweather said. "This is going to be an event like none other."

While other boxers such as Ali, Mike Tyson and Joe Louis have stepped into the pro wrestling ring, all of them did it at the end of their careers. Mayweather is making the transition in his prime, as a possible re-match with Oscar De La Hoya awaits in September.

"I'm not just any ordinary fighter," said Mayweather, who earned about $20 million for his 2007 fight against De La Hoya, which was the richest boxing match ever, generating revenue of $120 million.

"I dance with the stars, I play in NBA celebrity games; you just never know what Floyd Mayweather will do next. Next year I could be playing for an NFL team or an NBA team. You just don't know."

The Associated Press contributed to this story.

Mayweather is 39-0 in the ring, but the wrestling match will have a slightly more skewed tale of the tape than the 5-foot-8, 150-pound boxer is used to. Wight comes into match standing 7 feet tall and weighing 430 pounds.

If this was a 'real' fight, in or outside of the ring, even with Mayweather's superior technical fighting skills, I would still favour Wight with his greatly superior strength and mass.

I would appreciate opinions in comments. Is BlogRush working for you? If you do not use BlogRush, why not?

My traffic has not increased as of yet since I started using BlogRush, but in my estimation I have nothing to lose by using it. It is free and I know statistically through Site Meter that some persons have viewed my blogs through the use of the widgets. BlogRush also allows me to search blog widgets, which can provide potential links. I have in a short time found a few blog links with the use of the widgets. It is good to have some articles appear in the TrafficJam listings, which also provides more exposure.