The virtues that befit his dignity are ....

The heights which, through the most gracious favor of God, mortal man can attain, in this Day, are as yet unrevealed to his sight. The world of being hath never had, nor doth it yet possess the capacity for such a revelation. The day, however, is approaching when the potentialities of so great a favor will, by virtue of His behest, be manifested unto men. Though the forces of the nations be arrayed against Him, though the kings of the earth be leagued to undermine His Cause, the power of His might shall stand unshaken. He, verily, speaketh the truth, and summoneth all mankind to the way of Him Who is the Incomparable, the All-Knowing. 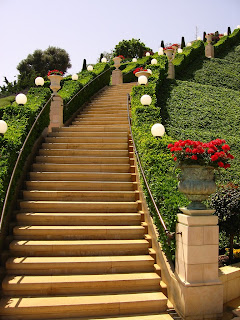 All men have been created to carry forward an ever-advancing civilization. The Almighty beareth Me witness: To act like the beasts of the field is unworthy of man. Those virtues that befit his dignity are forbearance, mercy, compassion and loving-kindness towards all the peoples and kindreds of the earth. Say: O friends! Drink your fill from this crystal stream that floweth through the heavenly grace of Him Who is the Lord of Names. Let others partake of its waters in My name, that the leaders of men in every land may fully recognize the purpose for which the Eternal Truth hath been revealed, and the reason for which they themselves have been created.
Posted by admin