MARTYRDOM OF THE BAB 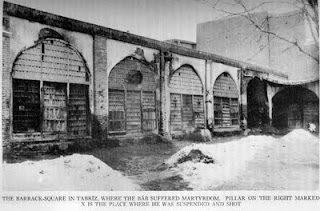 It would indeed be no exaggeration to say thatnowhere in the whole compass of the world's religious literature, except in theGospels, do we find any record relating to the death of any of thereligion-founders of the past comparable to the martyrdom suffered by theProphet of Shiraz. So strange, so inexplicable a phenomenon, attested byeye-witnesses, corroborated by men of recognized standing, and acknowledged bygovernment as well as unofficial historians among the people who had swornundying hostility to the Bábí Faith, may be truly regarded as the mostmarvelous manifestation of the unique potentialities with which a Dispensationpromised by all the Dispensations of the past had been endowed.
The passion ofJesus Christ, and indeed His whole public ministry, alone offer a parallel tothe Mission and death of the Bab, a parallel which no student of comparativereligion can fail to perceive or ignore. In the youthfulness and meekness ofthe Inaugurator of the Bábí Dispensation; in the extreme brevity and turbulenceof His public ministry; in the dramatic swiftness with which that ministrymoved towards its climax; in the apostolic order which He instituted, and theprimacy which He conferred on one of its members; in the boldness of Hischallenge to the time-honored conventions, rites and laws which had been woveninto the fabric of the religion He Himself had been born into; in the rolewhich an officially recognized and firmly entrenched religious hierarchy playedas chief instigator of the outrages which He was made to suffer; in theindignities heaped upon Him; in the suddenness of His arrest; in theinterrogation to which He was subjected; in the derision poured, and thescourging inflicted, upon Him; in the public affront He sustained; and,finally, in His ignominious suspension before the gaze of a hostile multitude-- in all these we cannot fail to discern a remarkable similarity to thedistinguishing features of the career of Jesus Christ.
Shoghi Effendi,
Posted by admin