What is the station of ‘Abdu’l-Bahá?

He is, and should for all time be regarded, first and foremost, as the Center and Pivot of Bahá’u'lláh’s peerless and all-enfolding Covenant, His most exalted handiwork, the stainless Mirror of His light, the perfect Exemplar of His teachings, the unerring Interpreter of His Word, the embodiment of every Bahá’í ideal, the incarnation of every Bahá’í virtue, the Most Mighty Branch sprung from the Ancient Root, the Limb of the Law of God, the Being “round Whom all names revolve,” the Mainspring of the Oneness of Humanity, the Ensign of the Most Great Peace, the Moon of the Central Orb of this most holy Dispensation — styles and titles that are implicit and find their truest, their highest and fairest expression in the magic name ‘Abdu’l-Bahá. He is, above and beyond these appellations, the “Mystery of God” — an expression by which Bahá’u'lláh Himself has chosen to designate Him, and which, while it does not by any means justify us to assign to Him the station of Prophethood, indicates how in the person of ‘Abdu’l-Bahá the incompatible characteristics of a human nature and superhuman knowledge and perfection have been blended and are completely harmonized.
Shoghi Effendi, The Dispensation of Bahá’u'lláh, paragraph 75 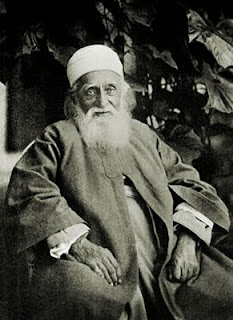 Though moving in a sphere of His own and holding a rank radically different from that of the Author and the Forerunner of the Bahá’í Revelation, He, by virtue of the station ordained for Him through the Covenant of Bahá’u'lláh, forms together with them what may be termed the Three Central Figures of a Faith that stands unapproached in the world’s spiritual history. He towers, in conjunction with them, above the destinies of this infant Faith of God from a level to which no individual or body ministering to its needs after Him, and for no less a period than a full thousand years, can ever hope to rise. To degrade His lofty rank by identifying His station with or by regarding it as roughly equivalent to, the position of those on whom the mantle of His authority has fallen would be an act of impiety as grave as the no less heretical belief that inclines to exalt Him to a state of absolute equality with either the central Figure or Forerunner of our Faith. For wide as is the gulf that separates ‘Abdu’l-Bahá from Him Who is the Source of an independent Revelation, it can never be regarded as commensurate with the greater distance that stands between Him Who is the Center of the Covenant and His ministers who are to carry on His work, whatever be their name, their rank, their functions or their future achievements. Let those who have known ‘Abdu’l-Bahá, who through their contact with His magnetic personality have come to cherish for Him so fervent an admiration, reflect, in the light of this statement, on the greatness of One Who is so far above Him in station.
Shoghi Effendi, The Dispensation of Bahá’u'lláh, paragraph 69
Posted by admin