A friend gave me a Paranormal Encyclopedia 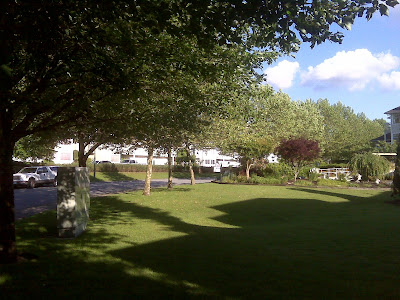 I live here and my friend Walter Thomas Franklin lives that way...
As noted on my other blog, thekingpin68, I am recovering from a vitrectomy, and have a temporary gas bubble in my eye. So my vision is 'abstruckted' obstructed.

The other day, my good friend and frequent blog commenter, Bobby Buff/Walter Thomas Franklin and various other aliases, gave me a gift, a castoff book given to him that he wanted to get rid of. However it may suit our purposes.

What an attractive cover. I could take a picture of myself with black eye presently, with my Blackberry and still be prettier than Wolfgang in the bottom right corner. And I have the alien freak beat, no problem.

Blackburn states that paranormal is phenomena supposedly beyond the powers of the mind. These phenomena are attempted to be understood scientifically. Blackburn (1996: 277).

So, I suppose I can discuss a section, at least, of this book and see what the public response is.
Ouija Boards
The volume suggests the word ouija comes from a combination of French and German words for yes. (p. 26). The board was produced as a parlour game in 1898 by the Field brothers of Baltimore. (p. 26). Today there are various versions of the game. 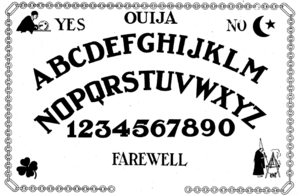 The board has numbers, the letters of the alphabet and some 'mystical symbols' to make it look scary. (p. 27). Participants place a finger on the pointer/planchette which moves on casters. (p. 27). It is supposedly moved by spirits. The participant asks a question and the answer is spelled out as the planchette moves on the board.

The ouija is seen as a channel for a person that is not a medium, in order for that person to make contact with the spirit world. This is seen as the case whether a spirit or person is actually primarily moving the pointer. (p. 27).

Now, quite obviously, this game could be used by someone who psychologically makes the board state what is desired. The game could also be used in order for a participant to deceive observers.
The occult as with religion can be used for psychological purposes which leads to unintended deception. The occult as with religion can also be used for the purposes of intended deception.
I would not assume that every use of this game/tool will lead to a paranormal experience. I would not assume that it would be a regular occurrence with the game. However, I am not an expert on the topic.

The text states that detractors suggest that supposed spirit messages could come from a participants unconscious. (p. 27).

The book states there have been an alarming number of violent attacks and teenage suicides involving certain disturbed impressionable persons who claim to have been following the instructions of demonic forces contacted via a ouija board. (p. 29).

The game can become dangerously addictive and a problem for those that are psychologically disturbed. (p. 29).

The book postulates the board may not be itself 'intrinsically bad' but should not be used by the irresponsible and immature that cannot handle what they receive. (p. 29).

I have doubts that disembodied spirits would even have the natural control or ability to respond to such a game. God had Samuel respond to a medium (1 Samuel 28), but that was a rare case.

So, the demonic forces suggestion is a reasonable one made by the text.
Further:

Demonic beings are opposed to God and are very evil.

They can Biblically harass all persons and in some cases heavily influence persons which is seen in the Hebrew Bible and New Testament.

Therefore, no person is responsible or mature enough to reasonably be dabbling with any kind of ouija board.

I am not some 'crazed fundamentalist' that the mainstream media can reasonably mock, but I reason that if a person is interested in spiritual life, the paranormal, and the supernatural, it is far more reasonable to have dealings with the infinite triune God of Scripture than his finite evil fallen demonic creations which serve his purposes, even as they oppose him (Job). 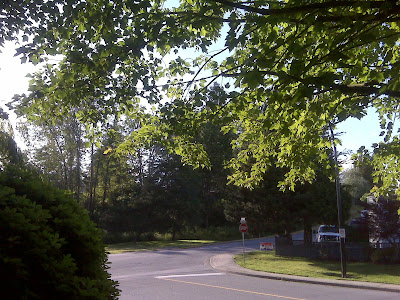 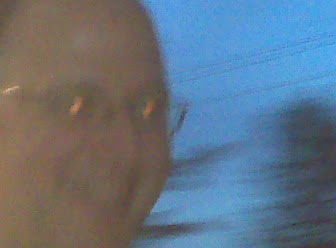 I saw the smoking baby on David Letterman. Not paranormal, but abnormal. Bizarre parenting.

However, that being said, he should have shook the hand and then went off by himself to cool off.

I admit I can strongly relate to his situation.

Hilarious fight in the net: Slovakia versus Italy. Look from 1: 15.
Posted by admin