Patriotism: Canadian, American and British concerning sport and other 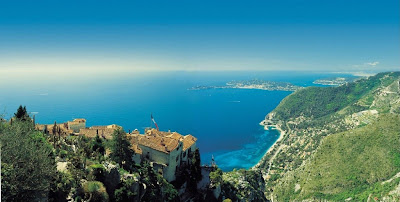 French Riviera (a place I would like to see)
Obviously a very non-exhaustive post.
I am Canadian, born in Canada; British my Dad was born there, and pro-American, in general terms.

1. It was good to see the Canadian pride and patriotism during the Winter Olympics in Vancouver-Whistler. A sense of community was built. This sense of community may lead to more problem solving within the Province of British Columbia and Canada and less bickering.
2. One of the things during the 1980s and 1990s that disturbed me concerning the American coverage of Olympic games was how the commentators seemed so focused on American athletes to the exclusion of those in the rest of world. From my Canadian perspective, this was philosophically attributed to American flag waving which Canadians mention.

This is one major reason as I child and younger adult, although being pro-American, I developed a strong dislike for the up and coming American hockey and soccer teams. I dreaded in the future having to view and listen to the commentators talk on and on about how America had triumphed against the odds once again as always, this time against traditionally strong nations in these sports and America was now the best in these sports just like in American sports.

Thankfully this has not as of yet happened, although the USA is a major hockey power they are not definitively the best, or usually the best. They have good soccer team, although not a top contender for the FIFA World Cup. I have serious doubts that the USA can ever dominate soccer as there are too many sports ahead of it in popularity in America that will take the best athletes. Plus there are many countries where soccer takes many of the best athletes as the number one sport.

3. Frankly, I have to admit, I think that over the last decade or so Canadian commentary has PERHAPS become more patriotic than American. I mostly watched Canadian Olympic coverage but also watched American in 2010. The American coverage on NBC seemed to spend more time on non-American significant contributors to the Olympics than did the Canadian commentators on CTV/TSN/Rogers Sportsnet. The Canadian coverage seemed intent on promoting Canada at all costs.
This became annoying to me. I think it more important to discuss the most significant athletes.
4. While living in England I certainly found the English and British to be patriotic and support their athletes, especially in regard to football. However, the close proximity to other European countries also very good at football, most notably, seemed to provide more objectively based reporting.

My argument is that patriotism in sports, Canadian, American, and British, for example, is good. Related overzealous patriotism that lacks intellectual objectivity, may often be harmless.
However, if a primarily non-objective overzealous approach is taken within religion and philosophy, the result can be intellectual blindness.
A possible thinking pattern:
I am born in Canada (for example), therefore I support Canadian athletes.
I therefore do not support non-Canadian athletes.
I am born in this country, therefore I support my country.
I therefore do not support a different country.

Something to think about. 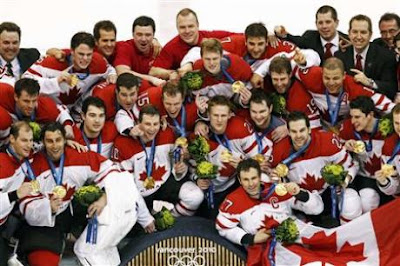 Team Canada win 2010 Olympic hockey gold.
Okay, okay, I know this guy in on my Facebook page and in the recent thekingpin68 comments (see link below), but here he is again. Version one, psychedelic and version two, perhaps the original.

It's like his batteries were running out after about 2 minutes and 30 seconds and the Soviets had to bring the propaganda machine back in to be recharged and oiled.