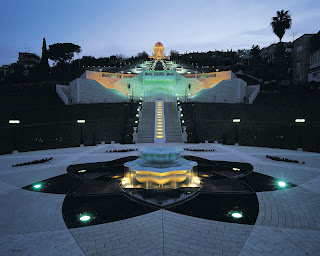 At the time of the opening of the first American Bahá'í Convention, convened in Chicago for the purpose of creating a permanent national organization for the construction of the Mashriqu'l-Adhkár, `Abdu'l-Bahá brought His undertaking to a successful conclusion, in spite of the incessant machinations of enemies both within and without. On the 28th of the month of Safar 1327 A.H., the day of the first Naw-Rúz (1909), which He celebrated after His release from His confinement, `Abdu'l-Bahá had the marble sarcophagus transported with great labor to the vault prepared for it, and in the evening, by the light of a single lamp, He laid within it, with His own hands--in the presence of believers from the East and from the West and in circumstances at once solemn and moving--the wooden casket containing the sacred remains of the Báb and His companion.

When all was finished, and the earthly remains of the Martyr-Prophet of Shíráz were, at long last, safely deposited for their everlasting rest in the bosom of God's holy mountain, `Abdu'l-Bahá, Who had cast aside His turban, removed His shoes and thrown off His cloak, bent low over the still open sarcophagus, His silver hair waving about His head and His face transfigured and luminous, rested His forehead on the border of the wooden casket, and, sobbing aloud, wept with such a weeping that all those who were present wept with Him. That night He could not sleep, so overwhelmed was He with emotion.

"The most joyful tidings is this," He wrote later in a Tablet announcing to His followers the news of this glorious victory, "that the holy, the luminous body of the Báb ... after having for sixty years been transferred from place to place, by reason of the ascendancy of the enemy, and from fear of the malevolent, and having known neither rest nor tranquillity has, through the mercy of the Abhá Beauty, been ceremoniously deposited, on the day of Naw-Rúz, within the sacred casket, in the exalted Shrine on Mt. Carmel... By a strange coincidence, on that same day of Naw-Rúz, a cablegram was received from Chicago, announcing that the believers in each of the American centers had elected a delegate and sent to that city ... and definitely decided on the site and construction of the Mashriqu'l-Adhkár."

With the transference of the remains of the Báb--Whose advent marks the return of the Prophet Elijah--to Mt. Carmel.
Posted by admin