Bahá'u'lláh's Departure from the Garden of Ridván

A memorable account of Bahá'u'lláh's departure has been given by Shoghi Effendi, Guardian of the Faith:

The departure of Bahá'u'lláh from the Garden of Ridván, at noon, on the 14th of Dhi'l-Qa'dih 1279 A.H. (May 3, 1863), witnessed scenes of tumultuous enthusiasm no less spectacular, and even more touching, than those which greeted Him when leaving His Most Great House in Baghdád. 'The great tumult,' wrote an eye-witness, 'associated in our minds with the Day of Gathering, the Day of Judgment, we beheld on that occasion. Believers and unbelievers alike sobbed and lamented. The chiefs and notables who had congregated were struck with wonder. Emotions were stirred to such depths as no tongue can describe, nor could any observer escape their contagion.' Mounted on His steed, a red roan stallion of the finest breed, the best His lovers could purchase for Him, and leaving behind Him a bowing multitude of fervent admirers, He rode forth on the first stage of a journey that was to carry Him to the city of Constantinople. 'Numerous were the heads,' Nabíl himself a witness of that memorable scene, recounts, 'which, on every side, bowed to the dust at the feet of His horse, and kissed its hoofs, and countless were those who pressed forward to embrace His stirrups.' 'How great the number of those embodiments of fidelity,' testifies a fellow-traveller, 'who, casting themselves before that charger preferred death to separation from their Beloved! Methinks, that blessed steed trod upon the bodies of those pure-hearted souls.' 'He (God) it was,' Bahá'u'lláh Himself declares, 'Who enabled Me to depart out of the city (Baghdád), clothed with such majesty as none, except the denier and the malicious, can fail to acknowledge. 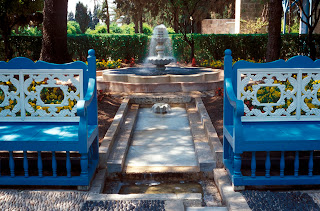