A good guy and not necessarily a nice guy 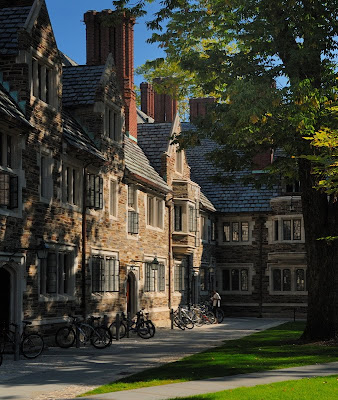 For a more academic article I have written please click here:

Reformed Theology and The Bible

Hello, and thanks for reading. It is warm up in my loft again, but I like writing up here more in the heat.

Comments appreciated on both blogs, even as anonymous or with a pseudonym.

My PhD finale pass from Wales could be in the mail any day. Once I have this document I can upgrade my CV and begin my worldwide search, although mainly in the United States, for work as a professor in Theology, Philosophy of Religion and Biblical studies. While waiting I have been assisting my Mom with her web business (see ad at the top of this blog that states Click here), studying a little mathematics and studying a fair amount of psychology, especially social psychology.

I am the type of guy that would play Wii with his friend's three little girls as the adults were playing board games. Sure I generally prefer computer/video games over board games, but I truly love my friend's kids, and they now have a son as well. They have now moved back to the South.

I would even play dolls with the girls when they would ask. Of course not the way they would play dolls. I usually managed to work some kind of satirical love spat and martial arts combat into scenes which made the little ones stare and laugh. Or I would spin a certain male doll around and around and the little ones made up a story that he was going 'potty' and would laugh and laugh.

So, yes I am that kind of nice.

I have realized the last twelve years especially, due to academic battles that although I needed to stay good in the Biblical sense and love God with all my heart and love others as self (Mark 12 and Matthew 22), I needed to better stand up to social and psychological attempts at manipulation.

At Canadian Baptist Seminary and Trinity Western University, although an A student I had not written a thesis previously and my advisor had never advised someone. The advisor left for the United States and I was given all the blame for a project that had to be shortened.

I had put almost complete faith in the system and my advisor, and was led to a point that was not where I should have been. It was there that I needed to make a stand and I did. Although the project did not do as well as I had hoped I did have a negative review letter taken off my permanent record by me taking a strong stand with the administration.

Here I realized that I should have informed the administration previously that I was not being advised as well as needed.

When I arrived at Manchester University to start my PhD my advisor was away for a year and my temporary advisor stated that if I did not change my views, think secular and stop believing that God created the world, in light of the problem of evil, I would not pass.

I met with my temporary advisor and I met with the academic Dean. They promised that after I came home for Christmas from BC, that I would not be reviewed academically for one year. I came back to Manchester after Christmas to an apartment that had been broken into with all my electronic equipment stolen. In the mail, or rather 'post' there was a letter from the academic department stating that I was to face academic review within one week.

I called the Dean via a pay phone, as I had no phone, and he offered double talk. The letter was wrong he stated, and although the meeting would not be a review, I would be grilled and needed to defend myself.

Going against my parents wishes (sometimes as an adult you need to do this, but I state this as I was the more informed adult) I told the academic department I would not meet with them, had met with my advisor and Dean concerning the issue already, and that I did not deal with liars.

Here, with God's guidance, I got myself out of a situation where they probably would have wasted a year with me and then booted me.

I tried to transfer to a Christian college affiliated with Manchester and was blocked by Manchester that stated I knew that I could not do the work.

Hmm, well if I knew I could not do the work why was I trying to do an in University transfer?

The level of work would be the same from one Manchester PhD to the next. I simply wanted to do that level of work and be able to come to my own reasonable academic conclusions.

One night in Manchester I prayed to the Lord for help finding another University or I would go home soon. I searched online for several Universities and emailed a few.

The next day a man from Wales called me on the phone and offered to be my advisor. I wrote the 30, 000-40, 000 word approximately MPhil thesis degree with no revisions after marking.

That is no lie.

Although while writing my PhD I did my own MPhil revisions (see MPhil posted on thekingpin68).

The other day an online teacher tried to use psychological techniques with me as I asked some questions on his discussion board and ordered one product previously. He tried to use Alpha male techniques and acted like I needed to commit to such and such with his organization and that there was no excuse for not doing so. I stated that I would make no such commitment, wanted to be online less, would be online less in the future and to take me off the list.

As a result he respects me and we remain in contact. I truly do need to be online less in the future.

Biblically, I am with God's help trying to be loving and kind but need to stand for the truth. I in no way claim anywhere near apostolic authority but in Acts 5 Peter was not nice and two people died as a result.

Sometimes it is ethically superior not to be nice. 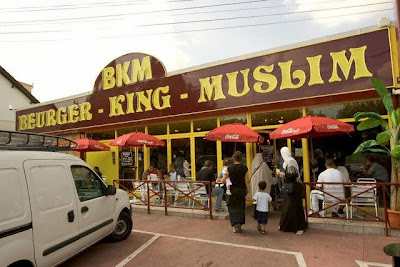 Photo sent to me from Jeff Jenkins

I am curious if they have a mascot, and if they do is he perhaps the Beurger King with a turban or the Sultan of Shakes? 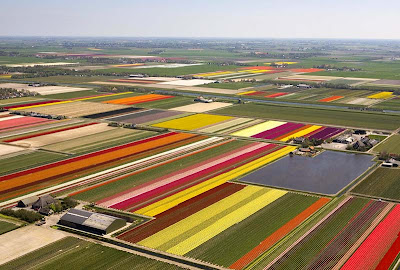 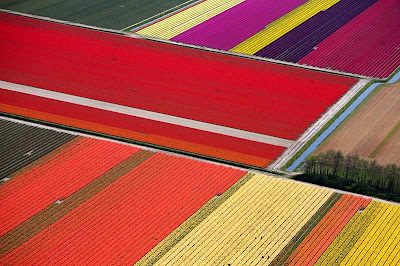 My Mom emailed me these photos of flowers, apparently from the Netherlands.


UEFA pulled the previous video off of YouTube, but this video is much better.

Internazionale Milano lost the second away leg of the UEFA Champions League to Barcelona. But, due to the first leg 3-1 victory, Inter won the semi-final 3-2 on aggregate.

Inter Manager José Mourinho ('The Special One', yes that is his nickname) went onto the Barcelona field using the number 1 sign (not the middle finger) pointing toward the Inter away fans and soon the sprinklers were turned on. Apparently he was in a confrontation with Barcelona's goalkeeper.

The football shenanigans...I must admit they make me laugh.

'Jose Mourinho was involved in an amazing bust-up with Barcelona goalkeeper Victor Valdes last night as his Inter Milan side fought its way through to the Champions League Final in a turbulent tie at the Nou Camp.

Mourinho called the 1-0 loss “the most beautiful defeat of my life” but it was marred by his clash with Valdes which happened as he charged across the pitch at the final whistle to salute Inter fans celebrating reaching the Champions League Final with a 3-2 aggregate win.

The Special One was intercepted by a furious Valdes, who grabbed him and wrapped him in a bear hug to try to prevent him waving at supporters high in the top tier of the stadium.

Mourinho eventually wrestled himself free from the grip of the keeper, who was then confronted by a group of Inter Milan players.

The Barcelona supporters hurled a fusillade of missiles at the former Chelsea boss as he tried to applaud his club’s supporters.

Then, as Mourinho and his players cavorted on the pitch in front of their fans, Barcelona turned on four sprinkler jets and drenched them...' 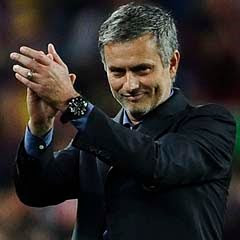 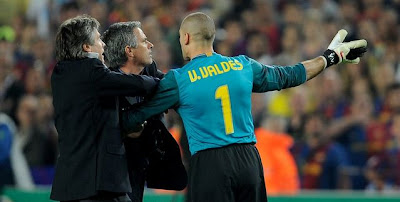 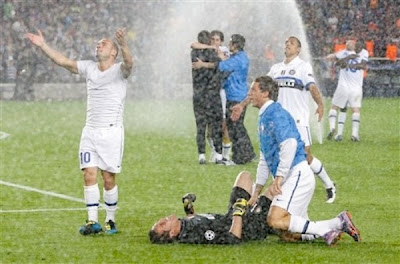 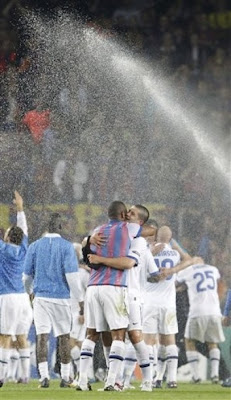