My comments on recent political hype in the media led to someone suggesting I favoured a theocracy.

Politically the hype is predictable, yet so many are influenced in major ways, time and time again.

What needs to happen in both Canada and the USA is an overhaul of political systems, but society is not ready for a purge for truth, as society does not yet see the failure of overly secularized government.

No, you are reading too much into what I stated. I never stated such...please be careful. But the Western world at this point is liberal and secular at an extreme. The United States is more conservative than most.

I am not suggesting theocracy, but the need for more rational common sense ways of looking at humanity and therefore how government should be run.

Government debts are too high, spending is too high, and there is too much reliance on government to do this and that for the people. Also, there is a liberal morality which fuels abortion on demand, same-sex marriage, and a weak legal system (here in Canada).

I would not desire for one religion to be favoured as those citizens outside of the religion could face persecution, and in the extreme case of a state church be considered to be committing treason.

There needs to be a conservative movement which pushes for overall human liberty, but also realizes that certain things are bad for society and should be prohibited.

M.J. Wyngaarden explains that word is derived from the Greek words for God, theos, and from kratein to rule. This represents the rule of God. and is traced back to the Old Testament concept and may have been coined by Josephus. Wyngaarden (1996: 1083).

All human beings are presently sinful.

I do not support any primarily human attempt at establishing theocracy.

A primarily human attempt at theocracy does not guarantee Biblically based rule through the guidance of the true God.

Serious religious error can develop within a theocracy as political power can influence theology.

Persons with views differing from the theocratic rule can be unfairly persecuted and even killed, as ones committing treason.

In the present age, I favour democracy over theocracy.

God and Christ are stated in Revelation, Chapters 21-22 to eventually establish the supernaturally culminated Kingdom of God. Human beings that are at all involved in ruling will be resurrected and sinless. 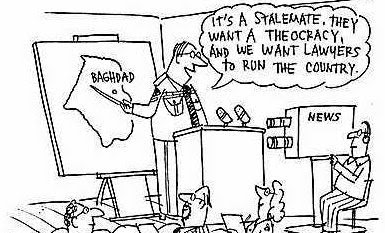 Anyone who knows me and/or reads my material should realize that I would be a fool to support theocracy on a person level. As Chucky states, although I am orthodox, I am subversive. I do not use that word, but I certainly am a non-conformist. I would probably be blacklisted by any theocratic government as their theology would likely become corrupted politically in sin.

No, thanks, I have no interest in supporting a political system that could lead me to martyrdom! Life is hard enough already.

Bugs Bunny: Eh, he don't know me very well, do he?
Posted by admin